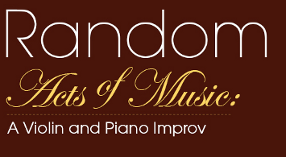 The original Random Acts of Music album. Recorded in 2011, this is the flagship disk of Acts of Music, performed by Tom Kopchak on piano and Russell Uhl on violin.

Random Acts of Music is an album comprised entirely of improvisation. With only the final track being based on any recognizable melody, this album represents what Acts of Music is all about: the joys of making music spontaneously.

The art of improvisation represents one of the most perfect forms of musical expression. Improvised music is “composed” as it is played, with the artists speaking through the notes and melodies they produce. They are as one with their instruments, expressing emotions in a creative, real-time, stream-of-consciousness format.

The very nature of improvised music makes its performance a unique challenge. The additional dimension of artists playing in the form of a duet raises this challenge to a new level. With two minds working independently as well as in concert, the possibilities are endless.

Tom Kopchak (piano) and Russell Uhl (violin) began their odyssey together at the Rochester Institute of Technology, as musicians for the Newman Catholic Community on campus. In the fall of 2009, Russell brought his talents to the Institute, where he and Tom, parish music director at the time, became good friends. Although it is difficult to pinpoint the moment when their styles began to mesh, they quickly realized that their individual improvisational skills harmonized to create a unique blend of music that was truly something special.

The results of this collaboration are as follows.

Random Acts of Music was recorded in two parts, at two separate times. “Together Again” is the first piece we played upon reuniting after an extended break. As you will hear, we decided to start off gradually, with a slow piece in C major. As we settle into our familiar habits, the piece grows in complexity. As the composition draws to a close, the complexity begins to wane, finally finishing in simple patterns with which it began.

It is often difficult to pinpoint when dusk turns into night. In this piece, that same correlation can be said of the opening tempo. The entrance of the violin seems halting and suspended: the instrument timidly searches between octaves, as if unsure of its place.

As the piece progresses, various slides and other musical devices are introduced, resulting in a mysterious but moving progression of sound. The key change mid-performance signifies the transition from night into day, where midnight at first gives way to long, gray shadows. The piece pushes forward into the breaking light, changing keys yet again. This tempest of musical energy spawns the original dark timbre, with a few artistic twists. One can almost hear the instruments struggling to blend and pierce through the clouds of darkness, which ultimately, as the piece concludes, split apart.

This piece begins softly and slowly, without a perceptible tempo. There was never a predetermined direction for the music: neither of the musicians possessed the slightest idea as to how the music would progress. The slightly richer sound of the violin is the product of a mute, which creates an almost whimsical, wispy quality. These elements combine to form a soundscape that could be found in a child's peaceful dream: a dreamscape.

Throughout the piece, there are multiple small solos performed by the piano. These transitional interludes transform the music in subtle ways that are almost imperceptible. On several occasions, expected impending key changes are abandoned at the last moments, seemingly to avoid the pitfalls of change in order to return to a more comfortable state. As the piece continues, repetition becomes evident, resulting in an enhanced awareness of the passage of time. Finally, as the piano plays its vamp over and over, the dream concludes with a quiet and gentle arpeggio.

This piece embodies the struggles facing the two instruments: the piano and violin. The opening is a fight for control, with both instruments trying to outperform the other; it is a classical take on the famous motif of the dueling banjos. As the midpoint is reached, the instruments seem to recognize that they must abandon their individual stylings and come together in harmony. They begin working seamlessly, allowing the music to flow more smoothly. Even amid this newfound partnership, their differences are not so easily reconciled: one can still hear small conflicts arise. It is only later that the instruments learn to interact with the other's unique attributes, resulting in a lovely and cooperative mixture of texture.

Rise of the Dawn:

The title is all-encompassing: imagine the sun peeking out over the horizon, slowly rising, casting long shadows. It gradually rises, triumphantly bringing light and promise to the world: the start of a brand new day. As townspeople awaken to greet the new morning, they are met with crystal clear skies and the cheerful sound of chirping birds. You hear a mother caring for her child as her baby awakes. The day progresses, as the villagers begin their daily work. The sun shines on, providing light to all. The children play happily in the streets. It is only as we near the day’s end, that something can be seen in the sky. We know not what it is; only that it holds hope and wonder...

The day turns. The violin seizes an excellent opportunity to soar on the semi-ostinato of the piano. After building tempo with open fifths, the violin erupts into the first line of Seek Ye First, a familiar Christian hymn. The piano takes advantage of this spontaneous interlude to employ excellent counterpoint by running the bass line lower and lower. As the day ends, the piece loses some of its power, but, true to its name, continues on for one last hurrah.

For this piece, the violin branches out in a different direction. The entire violin line is performed in pizzicato, rather than with the bow. The result is a smart-and-snappy tune bearing with a likeness much like a clock. One can hear the gears turning, grinding together. The resulting chronograph cranks away strongly until its abrupt and unexpected conclusion.

After the previous arrangement, we decided to take our music in a different direction. Here, then, presented for your enjoyment, is Peaceful Abyss. Designed to be an easy listening tune, this piece is gentle in its presentation. The violin remains calm and within a respectable octave, while the piano performs with minimal frills. One can envision a pair of lovers, dancing in each other's arms to this slow ballad. The music does heighten in intensity, but not so much that it becomes distracting. The piece concludes as gently as it begins.

Time flies. This is something we have all experienced. Feel it again, in this musical form. The violin begins with a rare solo with a very simple line that repeats over and over. As the piano joins, the tempo abruptly slows, then just as quickly regains pace, just as a busy person would greet a friend on the street before moving on. As the line develops, the violin continues the repetition on different sets of notes. The emphasis suddenly shifts, leaving the listener wondering if something was missed. The emphasis keeps changing, until finally it culminates in a radical change of flow. The piece becomes intense, the tempo surges, and the complexity swells. An upper octave is brought in. Even with the new form, we can hear the violin continuing the earlier repetition – the ebbing and flowing of time.

As the piece progresses, we hear yet another change. Time slows, giving the instruments an opportunity to explore some of the little frequented thresholds of their ability. The intensity ramps to a dramatic crescendo as the violin soars with an electrified note, while the piano provides a firm bass foundation.

After this high point, a period of relative calm follows. The instruments play more softly, as if to take respite from the preceding tension, even darkening the tune with a short lived minor run. They succeed in returning to their musical roots, however, and time finally slows to a jog, a crawl, and finally to a stop.

As any C instrumentalist will know, C# is one of the most challenging keys ever devised by human minds. Nevertheless, we answered the challenge and dove right in – as the only thing more daring than playing in a difficult key is doing so without music or a pre-defined sense of direction. For this piece, the violin stayed in the middle octave for quite a while until the strange key became comfortable. As it did so, small trills and the like were cautiously added, just as a scientist refines and improves his experiments as they progress. Overall, this research was a complete success. We were able to create an interesting piece of music in a very alienating key. Just don't ask us to do it again.

Awakening of the Bells:

This tune should sound very familiar. Modeled after the full hour permutation of the Westminster Quarters, this piece starts off with the piano designating that it is, in fact, time. Time for what? Time for music, of course! The violin intermingles with a soft countermelody that mutates into an echo of the chimes. As the piece builds in intensity, the piano plays a pseudo-vamp, repeating the same notes over and over with small changes. This provides a moving subdivision line for the violin, which plays its own countermelody.

The bass notes in the piano signify the striking of the hour. You can hear many clocks ringing off the hour at once, until the great clock comes in. All music halts while this king of clocks rings out over the land. After a few rings, the violin gently returns, dancing around, as if asking permission. The chime gains an octave in the piano, signifying additional timepieces entering the fray. While the piano continues to ring off the hour, the violin repeats the classic chime sequence, bringing this piece full circle – at least, so we think.

Additional bells are run in the right hand of the piano while the violin continues dancing. Suddenly, there is a dip in pitch of an additional clock with an odd tone. The violin softens, as does the piano, both waiting to see what will happen next.

We are not disappointed. Unexpectedly, the piece quickens, as the bells awaken and come to life. All of the clocks can be heard now, including the small, different ones in the violin. Another oddball rings out, and then the violin repeats yet again the classic chime sequence. Meanwhile, the piano is hammering away at its various bells in the bass line, desperate to ring out the time for all to hear. One final oddball chime is played on the violin, which grows ever higher, resulting in a long harmonic that eventually fades with the piano. As the end approaches, the piano takes us to the conclusion of the album with the final repetition of the chime sequence. Three final chords are played, where the violin makes its last appearance by playing the third set from the sequence in pizzicato, stealing the last word from the piano in a bold yet apprehensive manner. The final notes are final to be sure, but leave the sense that more is coming…